Gurglings of the past: 3 Exhibitions at PinchukArtCentre

On May 6th, shortly after lockdown and pandemic-related limitations lifted, the PinchukArtCentre in Kyiv reopened its doors to three current exhibitions centred on local history and conflict. A major solo exhibition of Nikita Kadan’s work “Stone Hits Stone” and a duo-exhibition “Tailings Dam,” with new work by Daniil Revkovskyi and Andriy Rachynskyi, balanced both past and present. “Remember Yesterday,” however, presenting Ukrainian art from the PinchukArtCentre’s collection in dialogue with contemporary artists failed to carve out space for the future in its attempt to grasp the vulnerable topics in today’s Ukrainian society.

Based on year-long research within the framework of Pinchuk’s Research Platform, ”Stone Hits Stone” by Nikita Kadan is this year’s institutional frontrunner. Built around ideas of revolution, historical avant-garde, and pogroms the show uses history to enlighten the present and imagine the future. The exhibition begins with a historic prologue carefully curated by Kadan; Manuil Shekhtman’s “Jewish Pogrom” (1926) beside Vasyl Yermilov’s design sketches for a campaign from 1919, while work by Ivan Padalka and other artists of the Ukrainian avant-garde engage in a dialogue with Kadan’s sculpture “Tiger’s Leap” (2018). Fittingly, Kadan’s work refers to Walter Benjamin’s concept of instrumentalizing the past in order to actualize contemporary political urgencies. The prologue is penetrated by sound spilling from the next gallery, reminding us that historical events always bleed into each other.

The second gallery is host to “The Inhabitants of Colosseum”—one of the most powerful works within the exhibition, created during a public action in Regensburg, Germany in 2018. In Regensberg the artist invited the volunteers to repeat a walking route to a satellite of the Flossenbürg concentration camp that was set up in the Colosseum theatre. Volunteers walked from the camp toward the train station wearing wooden shoes. The echo of this violent history revives the zeitgeist, in Benjamin’s words.


Staged in a ubiquitously plasterboarded space, the exhibition creates an impression of a black and white encyclopaedia illustrated by numerous historical references and riddles that reflect the ongoing war in Donbas, the contested Donetsk-Luhansk region important for its coal mining, and the artists of the Ukrainian avant-garde (1910-30s).
The exhibition comprises earlier works “Spectators” (2016), “Chronicle” (2016), “Pogrom” (2016), “Victory” (2017) among others loaned by established institutions such as MHKA, MUMOK, and Museum of Modern Art in Warsaw together with newly produced pieces. To the uninformed visitor, the exhibition might seem unemotional and monotonous, however, every single object tells a horrific and non-linear story to those familiar with Ukrainian history.

For example, Kadan’s sculpture “Victory” (2017) is a reconstructed model of Vasyl Yermilov “Monument to three revolutions: 1825, 1905, 1917”, deprived of colours and fully painted white with cups, collected from Donbas, atop the sculpture. The artist highlights Ukraine’s splintered and complicated fight for emancipation that has lasted more than a century. In his “Broken Pole” series, the artist juxtaposes images of lost Ukrainian avant-garde artworks with found images of buildings that have been demolished in Donbas during the war. The works speak to ruination and the weight of cultural and political loss. Awkwardly, the images of Donbas are aestheticized, beautifully reproduced on silk tissue fixed to heavy iron surfaces.

Neighbouring “Broken Pole,” “The Coal of the Donbas (Yermilov–Braque)” continues to investigate relations between art and power, art and war, as well as the ambiguity of the avant-garde. In Ukraine, the avant-garde was marked by progressive thinking realized through repressive methods. Taking the form of an agitation poster by Yermilov, Kadan keeps the same appealing propagandistic form in this new work that questions if there is a space for freedom in contemporary Ukraine, or if we are stuck in a ferocious present. Borrowing George Braque’s symbolism, he ponders if we are able to dodge the threatening blackbird of fear.

The black motifs—coal, resin, and burnt materials—also appear in “Lysa Hora Architecton” created together with Dana Kosmina, the exhibition’s designer. Entering the space, the viewer is faced with a huge monument resembling “Pedestal,” a piece that Kadan exhibited in the same space ten years ago, in 2011, when he was awarded the PinchukArtCentre Prize. That was the start of Kadan’s vibrant artistic career. ”Lysa Hora” also quotes Kazimir Malevich. It is assembled with a model of a burnt house and a lightbox featuring an article about the pogroms of Roma people in Lysa Hora, a Kyiv neighbourhood, published on the online media outlet Zaborona in 2018. Combining the testament of the avant-garde with today’s violent reality, Kadan questions possibilities for the future. In contrast to the saturated, colourful and replenished exhibition’s prologue, contemporaneity appears strictly black and white, evoking the impossible struggle to withstand violence.

The exhibition concludes with the documentation of “The Inhabitants of Colosseum” and “Anonymous. Tarred”—another “quoted” object, from an unknown student of Vkhutemas—a Soviet state art and technical school founded in 1920. Boasting an abundance of resin, the latter communicates the ambiguity in interpretations of the avant-garde. Returning to “The Inhabitants of Colosseum” is an expected yet beautiful closure of the exhibition and curatorial choice that mirrors the instructive nature of Kadan’s work–leaving the viewer with a precise explanation of what they saw in the exhibition’s prologue.

“Remember Yesterday” features a Ukrainian part of the PinchukArtCentre’s collection in dialogue with contemporary artists. Collection and its reconsideration is always a safe choice in the context of the crisis that one feels worldwide today. Appeal to the collection gives a possibility for the institution to make a reflective pause in order to consider its future development in the face of radically changing realia. “Remember Yesterday” epitomizes the Ukrainian ongoing self-historicizing tendency in a recurrent appeal to the past. An important question is whether this appeal conserves some space for a future? Trying to grasp all the vulnerable topics in today’s Ukrainian society, the whole exhibition lacks integrity and criticality in its failing statement.


The most impressive exhibition presents work by the young artist duo Daniil Revkosvkyi and Andriy Rachynskyi who base their work on research in industrial zones in Ukraine. “Tailings Dam” invites the viewer to a fictitious museum of Human Civilization, the result of the artists' sojourn in the region. The title is taken from a dam that runs into the city of Kryvyi Rih in Kryvorizkyi Iron Ore Basin, known as Kryvbas. An industrial area that faced difficulty and scandal during processes to move from one-state ownership to privatization between 1990 and 2004. A moving video “Clanking, Hammering, Dispute, and Gurgling” is the centrepiece of the show and is composed of four parts featuring seemingly absurd gestures performed by the artists themselves.

During the four acts, the scenery becomes more remote—shifting from a graveyard to a sublime landscape. Through the subsections—Clanking, Hammering, Dispute, and Gurgling —the artists narrate the remote and recent past, present, and future of the region. Filmed in the most important metallurgical spot in Ukraine, ecologically threatened and devastated yet magnetic, the video proposes a deep reflection on resources, ecology, humankind, and the future told through a local phenomenon. In the second smaller room of the exhibition, a dried-out station for drinking water as if to warn us of what is to come. Strengthening this sentiment, the last part of the video heard in this space replays useless quarrels of human beings that soon will turn into a simple gurgling, echoing from the past. 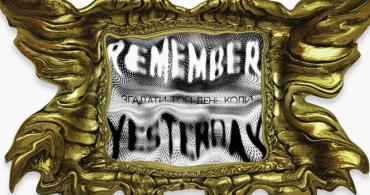 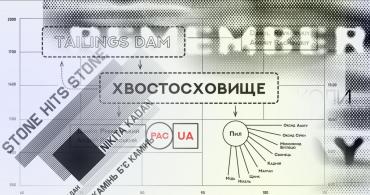