Voloshyn Gallery (Kyiv, Ukraine) and the Mexican gallery of contemporary art Tiro al Blanco (Guadalajara, Mexico) present a group exhibition of Ukrainian artists entitled "Transcending boundaries". This curatorial project is an international collaboration in which a project by Ukrainian artist will be presented in Mexico for the first time in 30 years of Ukraine's independence. Lesia Khomenko, Kateryna Lysovenko, Kinder Album, and Anastasiia Podervianska take part in the exhibition. The curators of the project are Omar Lopez-Chahoud (artistic director and curator Untitled, Art fair) and Rodrigo Hernandez (gallery owner, founder of the Tiro al Blanco gallery).

Ukrainian art generated by one system is literally transcending boundaries, overcoming a distance of thousands of kilometres, where it collides with another paradigm, creating new complex relationships. The approaches of the authors in their works also collide with each other from different angles, complementing each other, balancing between negation and assertion, while going beyond their context. In her works, Lesia Khomenko deconstructs the narrative of the image and turns paintings into objects. Due to her interest in comparing history and myths, the author discovers ways of visual manipulation. As a rule, in her works, Lesia Khomenko creates complex statements with strong critical potential. As part of the exhibition, Lesia Khomenko presents some of her important early series on which the artist worked for six years. "Giants" is a series of large-format paintings in which ordinary people — the "heroes" of the modern world – are presented from the "frog's point of view". In her practice, the artist turns to her Eastern European identity, associated with the Ukrainian academic art system. In his early works, Khomenko simultaneously criticizes and rethinks the elements of visual language rooted in the post-Soviet figurative school. In the presented works from the series “Polar bear swimmers" the author considers her works as a deconstructed tool of the facade of the state representation. She chose the theme of sports as the main substitute for battle interstate confrontation. Khomenko was interested in the representative aspect of winter bathing — the moment of triumph after emerging from the icy water. However, Khomenko's athletes are very far from Olympic ideals, the polar bear swimmers are not even athletes, but their physical training is no less serious and "heroic" than in canonical sports.

Kinder Album projects are always a study of the facets of intimacy and sexuality, a kind of call to the viewer to test their willingness for openness. Several miniature sculptures the size of a teacup by Kinder Album are mostly about either the murder or the suicide of the characters. In these exhibited sculptural images by Kinder Album, you can recognize the figures of celebrities: Jerome Salinger, Marilyn Monroe, Ingmar Bergman, and others. But the viewer is left with the question of whether all the "non-obvious" characters are known and whether they can all be potentially recognized. The artist imitates children's style through the use of various tools and materials: felt-tip pens, paint, and soft clay for modelling. For the most part, in the works of Kinder Album, the form that imitates the children's manner of performance resonates with the "adult" themes and plots with which the artist works – this is the effect that distinguishes Kinder Album from other authors.

Anastasiia Podervianska’s artistic activity is an attempt to overcome stereotypes about the perception of textiles as decorative and applied women’s handicrafts through its use as a medium of contemporary art. The basis for the work of Anastasiia Podervianska were folk interpretations of biblical stories and legends about the creation of the world, in which a variety of beliefs were intertwined. At one time, Podervianska became interested in Georgy Bulashev’s book “The Ukrainian People in Their Legends, Religious Views and Beliefs: Cosmogonic Ukrainian Folk Views and Beliefs”. Written in 1909, the book contains short stories that reflect folk beliefs and demonstrate the fusion of paganism and Christianity. Each canvas corresponds to the plot of one of the legends. Anastasiia tried to combine in the paintings traditional folk motifs with the decor of the present day: ethnic embroidery and ornaments with modern prints and meme texts. In some canvases, the base is a hand-embroidered tablecloth, a blanket (well known to the audience), a rug, and the elements of the composition are beaded details, hand-woven lace, and appliques.

In her work, Kateryna Lysovenko explores the history of the use of painting as a tool for creating myth and propaganda. The author refers to the scientific works of various philosophers and sociologists. For example, the German sociologist and art theorist Theodor Adorno once noted that modern society, its ideologues, and science have not left myth. The isolation of science and ideology makes cognition and, perhaps, political projects tautological. In the new series of paintings "Like the Bible" Kateryna refers to the works of Karl Popper. In particular, the artist refers to his book "The open society and its enemies", written on the topic of political philosophy. The author tries to look at it as the Bible. As an important religious text of our time, and create works on it, like artists who created stories on mythological and religious ideas.

The founders and curators of the project aim to expand horizons, open new opportunities, and pave the way for Ukrainian and Mexican artists. The exhibition will run from October 27, 2021, to January 15, 2022 (gallery of contemporary art Tiro al Blanco/Guadalajara, Mexico).Share:
related 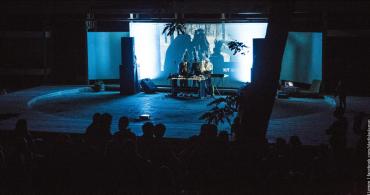 31.05.2021Construction festival is back: 10 days of new media and audiovisual art in Dnipro