New season of lectures about art at the ОБРАЗ

On December 1, at 20:00 begins the eighth season of the course of the lectures about art ‘ОБРАЗ’, which will be held online. The organizers invited Ukrainian artists to talk about their colleagues, whose work they consider important.

The lectures course ‘ОБРАЗ’ has been held at the Closer Art Center since 2014 and now has seven seasons, covering the chronology of art development from the 15th to the 20th century, as well as a separate course dedicated to performance art. In 2019, a new format dedicated to Ukrainian contemporary art was launched — in an informal atmosphere, Ukrainian artists and cultural figures talk about artists, creative associations, and trends in art that are important to them. First of all, these are practices that reveal the topic directly through the prism of their own experience and professional activity.

Lectures are held online, recordings will be published on the Closer and OK Projects Facebook pages every Tuesday and Thursday at 20:00.

The lectures are supported by the Ukrainian Cultural Foundation.
Share:
related 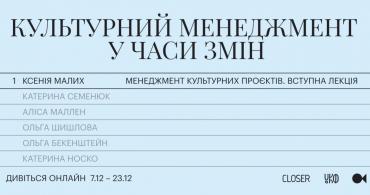 04.12.2020Series of lectures «Cultural Management in Times of Change» from the art center Closer