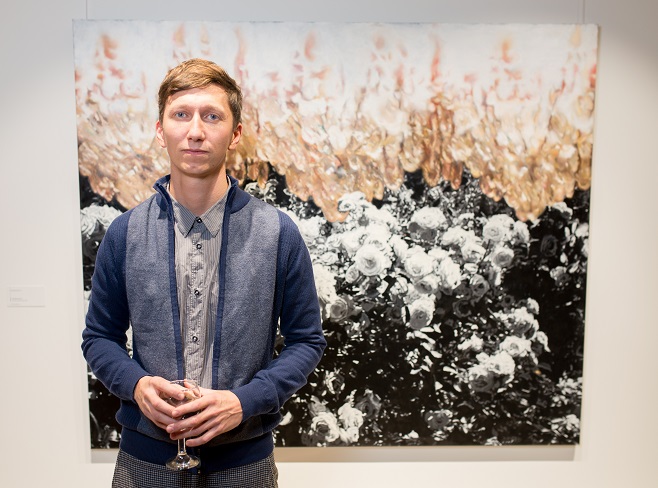 «Voloshyn Gallery» has introduced a new group project of the artists Artem Volokitin, Tatyana Malinovskaya and Vitaliy Kokhan “Photosynthesis”. Large-scale paintings, videos and installations have demonstrated three points of view on the phenomenon of photosynthesis. According to the authors, the conversion of sunlight into life energy of organisms is a theme full of aesthetic relapses, philosophical meanings and emotional images. Exclusively for ArtsLooker, the journalist Roxana Rublevskaya has met the mastermind of the project, the artist Artem Volokitin, to learn more about the new series and his artistic experience.

Inspired by the works of the Renaissance great masters, Paolo Uccello and Lucas Cranach, the Ukrainian artist Artem Volokitin creates picturesque scenes close to magical realism. He graduated from the Faculty of Industrial Design at the Kharkiv State Academy of Arts, but devoted his life to painting. Becoming the winner of the PinchukArtCentre Prize, the young artist gets the chance to do the course in the famous British sculptor Antony Gormley’s workshop, and later to make his debut in a parallel program of the Venice Biennale of 2011. Having returned to Kharkov, Volokitin continues to experiment, work on the series, each of which is amazing and unexpected for the viewer in its own way. The artist’s works have been shown at London’s Saatchi Gallery, the Ukrainian Institute of America in New York, as well as the Danish fair Art Copenhagen and German Kolner Liste.

Why, dreaming about painting, did you still enter the Faculty of Industrial Design?

For me it was essential not to paint at the time of studies, and devote to it exclusively my free time.

Who among Western artists has influenced you in your development as an artist?

First of all I would like to mention Ukrainian artists, because there have always been  people whose works are inspiring. During my formation I was influenced by Tistol, Matsenko, Senchenko, Makhov, Gnilitskiy. From the Western painters obviously Paolo Uccello and Lucas Cranach.

In 2009, you became the winner of the PinchukArtCentre Prize and went on an internship to the famous British sculptor Antony Gormley’s studio. Did you choose the master yourself?

I was fascinated by Antony Gormley’s works, so I deliberately chose him for my internship. While in his studio, I watched the whole process of creating a work from the concept to the final stage of its implementation. I was always interested in whether he associates himself with his sculptures, and how the finished work differs from the sketch.

In the West, it is a widespread phenomenon for a young artist to become an acclaimed master’s assistant, learning from him all the details. Doesn’t it discourage the young artist’s personal development? 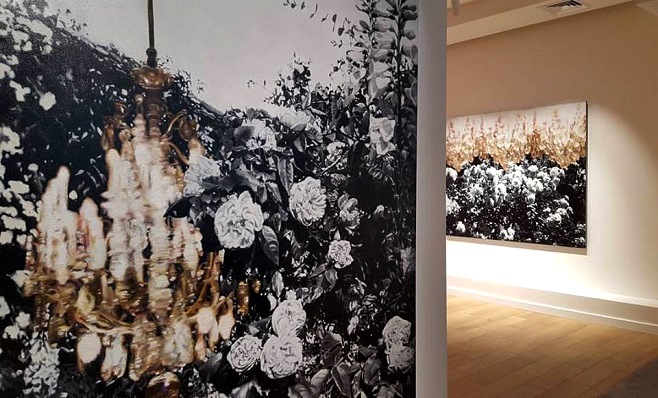 Project “Photosynthesis” at the Volosyn Gallery

When I went to the training, I have already been shaped as an artist, so meeting with Gormley did not bother me, and certainly didn’t break. At that moment, I knew exactly what I would create. As for the young authors, they need to understand, who they are going to and why. You are right, one master can suppress, the other – inspire. I think a decision on probation should be well considered. It should be taken in the case if the young artists already have their own unique style and well-formed attitude towards art.

Did the trip to take the internship impact your work?

This trip has helped me to have a wider look at art in general. I saw hundreds of works firsthand and understood why so much has been written about them. When there is a possibility of personal contact with a piece of art, you can see in detail its shape, texture and color – it’s fascinating.

In 2011 and 2015, you took part in the program of the Venice Biennale. Could you tell me how exactly the selection of artists takes place for one of the largest international exhibitions?

It’s simple. For years, the artist creates the actual works, after comes a dialogue with the curators working on the pavilion exposition and the artist is offered a possibility to represent the country at the Biennale. If the author does not like the concept, he can refuse to participate.

You turned to figurative painting in an era when artists prefer installations, art objects, and kinetic sculpture. Do you agree with the opinion that painting is gradually dying out?

Well, no one says: “Video is dying”, but saying “The art is dying” is a totally different matter! (Laughs). It has been said about the theater, but for some reason it has not disappeared. It seems to me that such discussions only attract public attention. And then, modern art has not changed since the 60s of the last century. Now even an artist’s craziest work seems casual. Along with painting, there exist installation, photography, video art, and this is not surprising. I can assume that soon everything will return to a more comprehensible visual image. There are too many subtle ideas around that practically aren’t comprehensible, so personally I would like to have more clarity and beauty.

What is the actual process of work creation like in your case?

I write down my ideas, ponder them, collect material, visit museums. Later, all this is combined, composed and expressed. The creation process takes up to three months, depending on the complexity of work. Creating a project “Photosynthesis”, I was inspired by the botanical gardens, visiting the castles, photographing chandeliers with different light. The paintings that are included in this series were impossible to create fast because of the numerous details.

For more than a year, you’ve been painting landscapes (the project “Photosynthesis”, “Operating Instructions”), before that you were working for a long time in the genre of portraiture. Who is the character for your portraits?

In portraits I wanted to achieve a kind of realness. Meticulously building up every mise en scene, I felt like a director. I wanted to show a particular person. Sometimes elevated, sometimes reproducted and impersonal.

Why did you switch to landscapes?

I changed. In the case of “Photosynthesis” I wanted to do something lyrical, baroque, give the impression of something overflowing. I imagined the garden at neutral twilight lighting with a glowing object. The chandeliers make the painting realistic, being the only color element in the composition.

The idea of ​​the project “Photosynthesis” that is exhibited at Voloshyn Gallery belongs to you. Why did you decide to implement it with these very artists, Tatyana Malinovskaya and Vitaliy Kokhan, and not someone else?

Because I know their capabilities. Their works complemented my project. I wanted to create a discord which would uncover the main idea. As a viewer, I like it when my realistic gardens are next to Malinovskaya’s painting with huge patches of color, and in front of it Kokhan’s web, resembling graphics from a distance. If you start from the name, the “Photosynthesis” can be interpreted as a synthesis of different types of fine arts and synthesis of three authors’ styles.

Are you considering the possibility of emigration?

I like to live and work in Ukraine. Why would I love and admire someone else’s culture when I have my own? I am deeply convinced that some people just need to leave if they dream about it, but the biggest illusion of our fellow citizens is believing that all the possibilities are hidden in the West. 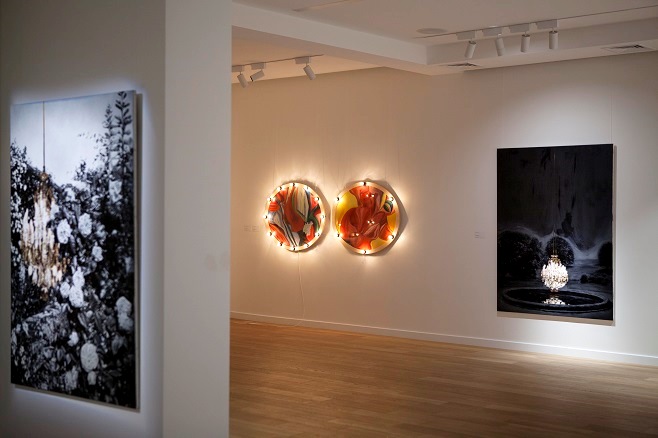 Project “Photosynthesis” at the Volosyn Gallery

What are the challenges the Ukrainian art is facing today?

Art is a continuous process, similar to breathing, so everything is cyclical in this system. Something is formed, something falls into pieces. There will never be any stability. Ecosystem is a living structure and to analyze its activities, it is better to split what is happening with us into decades. For example, for the 90s were characterized by tension, anxiety, and fatality; the 2000s – by flowering, appearance of institutions and budgets. Now, to realize a truly interesting project you won’t have enough money. We need ideas, thoughtfulness, blandness.

Creating a new series, do you take into account art market trends? Are you thinking about the future buyer?

If I was thinking about market trends, it would not have addressed a variety of topics and forms. I have been strongly advised not to move, in order not to lose the “gold mine”, the direction that can be profitable, but I cannot be like that. I like to work this way and another. I love to experiment. I am changing, so is my painting.