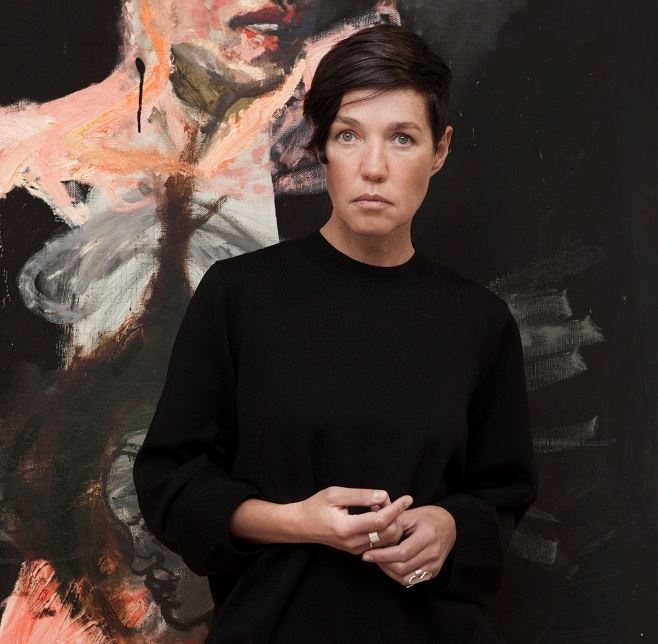 From 15th of February to 26th of March, the art space of Voloshyn Gallery is presenting a solo exhibition of the famous Ukrainian artist Vlada Ralko. The project “The close among the forgotten” includes works from different periods of the artist’s career. Some of the paintings have already been exhibited in the series of “Signs,” “Envy to the reality,” “Twins,” while the other part shows the works that are new and yet undiscovered by the audience. Especially for ArtsLooker, journalist Roxana Rublevska has interviewed the author about the body as an object of study, the expressive color palette and the unique style of the author’s technique.

How did you select the works for the exhibition project “The close among the forgotten”, presented in Voloshyn Gallery now? Could we say that in some way it summarizes a certain stage of your art development?

Recently a Polish curator, we had met in the studio, asked me to show the works I created “before” “Euromaidan” and to compare them with the new ones. The thing is, I rarely review my finished works, therefore, due to this interest from the outside, I got a chance to compare and figure out the difference. In my art before 2013, the body is always placed on a homogeneous background, separated from the context, time and space. Something happening with the body announces itself through a painted wound, its relative lack of integrity and fragmentation. 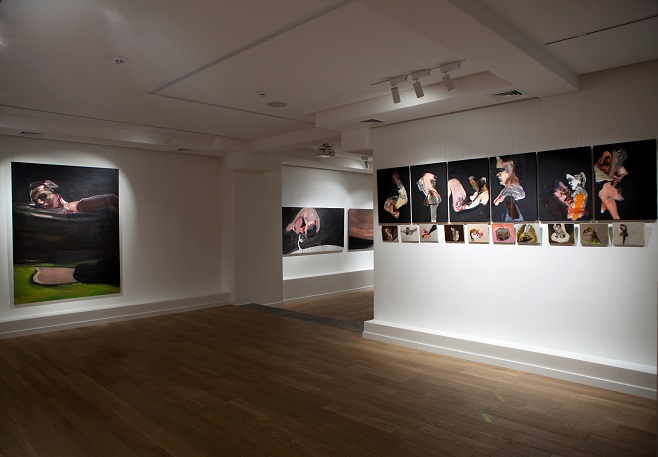 Exhibition project “The close among the forgotten” by Vlada Ralko in Voloshyn Gallery. Kyiv, Ukraine

This “something” has been sort of tearing or injuring the body from the inside and thus appeared on the surface. When I, so to say, decomposed the body into pieces, it is done in order to point out this invisible event. The internal struggle, pain, love, shame, doubt, death, memory, everything concealed inside of a body has come out to the surface, become visible and embodied in the events of Ukrainian opposition. The choice of the artworks was rather intuitive, and the principle was stated in the exhibition title. I wanted to search among some works for specific matches to the present, to see where exactly, in what points I had paid attention to similar things. 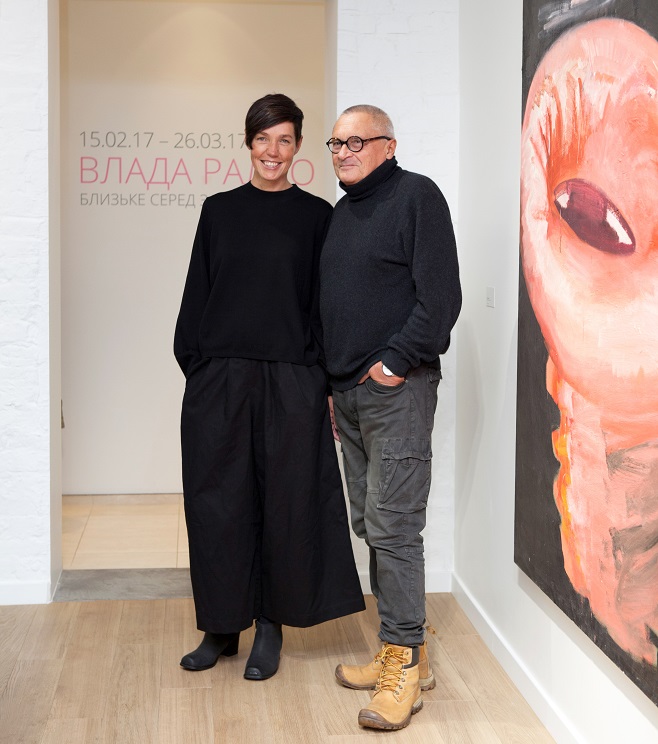 What is the fundamental difference between the works created “before” “Maidan” and the new ones?

Essentially nothing has changed. I continue to analyze the same things, aiming to tell a story of specific military events. Basically, in the revolution and the war, from the beginning I saw a message about the prospects and borders of what is “human.” Each event revealed people in a different way. That is why the recent works show a lot of specific details that have become impossible to ignore, as they were highlighting a person in its very significant and important manifestations. I have appointed certain elements to be expressions of the body myself. Some outer objects like flashlights, axes, humus, weapons, etc. were allegedly aimed at the person, as if to trial it. However, at the same time they pointed out: look! that is a person, that’s what it is like.

Do you remember the feelings and sentiments you had during the creation of the series “Kyiv Diary” and “Signs”?

I thought that “Kyiv Diary” was completed because of the fact that the events stopped to develop, started moving in a circle and it was necessary to focus on the state of uncertainty where we are all stuck now. It seemed to me that we should move back a little, to search among what seemed complete. In contrast to an active action present in my recent works, I wanted to draw attention to some previous paintings, where the action is unconscious, barely visible or entirely absent. The works from the series “Signs” deliberately did not contain any clear meaning, at least on the surface. In 2008, when I was working on them, I would forestall the question “What does that mean?”, suggesting instead of an explanation, the lack of content as vulnerability and challenge at the same time. I wanted to turn the audience 180 degrees, to create a kind of vicious circle, where each issue is questionable due to the lack of response. Concerning the work “The Heavy Sky”, which was completed later in 2013, right before the start of the student protests in Kyiv, I expressed something very similar to this: the fatigue of distinction between unknown and dangerous. Now, I seem to have that feeling back again. 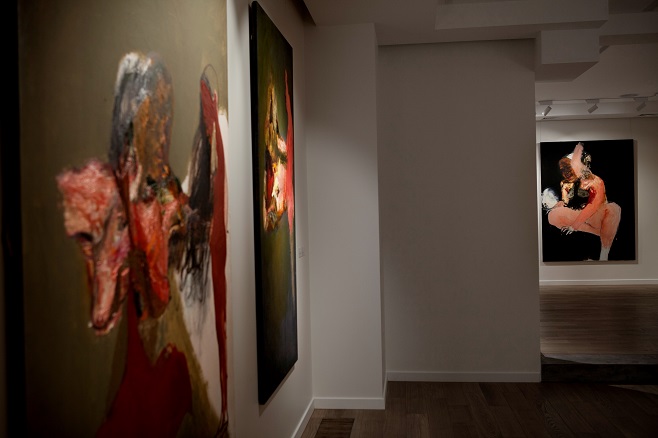 How do you select a color palette?

I like black or gray backgrounds. Again, when it comes to “Signs,” I had an association with the road signs that resemble flashes in the headlights at night. They emerge from the darkness for a brief moment and then disappear. In “The Shelter”, on the contrary, I “heated up” the colors in the depiction of the domestic scenes. So, thanks to the color, I turned the usual situations into something dangerous.

In the project “The close among the forgotten” you were guided by the lack of alienation feeling, which was present in relation to previous works. Can this feeling be compared to that described by Erich Fromm, saying the stronger the force released, the less power a person has to confront itself? It does not belong to itself anymore, but is under the power of the work, instead. Are you withstanding your own works? 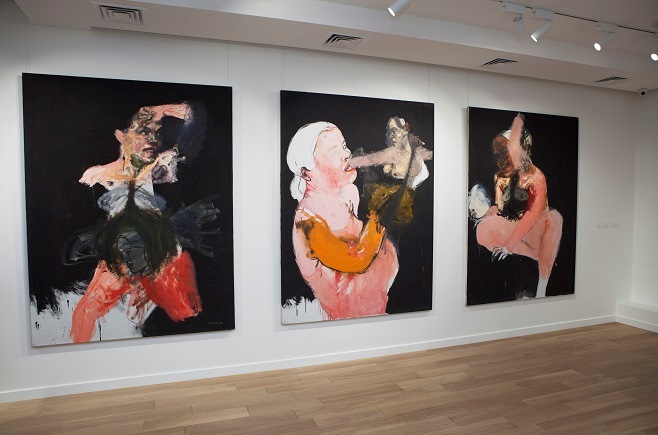 Everything is much simpler: I lose interest in the finished works immediately after their completion. Almost all of them. It seems like I said something about them during their creation, and when I finish speaking, I cease to hear my own voice. What I find more important is the will to stop in time and not to show everything. Each painting must have something unfinished, there must be a feeling that is behind each of the works or series, there is something exceeding them.

Previously, you were interested in researching the body, and now the corporal is leaving it in order to look at what was left from the outside. What caused it?

It seems that now a body is almost impossible to keep in the usual borders. Recently I have deliberately decomposed it, because behind a dense form it was pointless to hope to see the war taking place inside it. Now, on the contrary, it seems that a person itself, is no longer kept as one unit and is coming apart on its own. The war is outside now and the integrity of the body is now almost unjustified. Alternately, everything disappears that was the reason to take care of this personality’s showcase or, the other way round, a reservoir of anonymous standards. Whatever it is like, it hardly worries me, as it has exhausted all its possible roles, got consumed through its illegible openness. We saw it naked, dead, wounded, modified, deprived of certain parts, divided, tortured and we have become unconfident and afraid of ourselves. From the very beginning, every action made by the body, is considered to be a simulation. I used to be highly interested in everything that led to the mysteriousness of the corporal, but now it seems to be tired to resist. 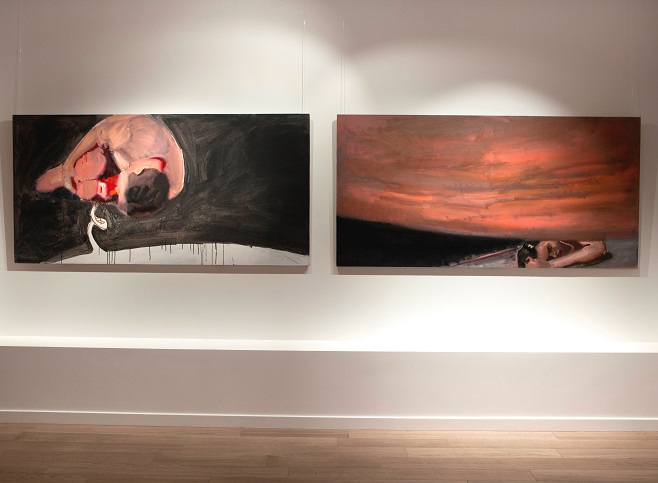 Can we call all modern art (and yours in particular) political?

Can art today take on a mission to become the visual embodiment of ideology?

By nature, everything that has to do with art, goes beyond any ideology. Irrational components of art inevitably destroy either ideology, or art. It’s a force that must be distributed somewhere and if it gets to a limited space, it reverses its own devastating wave in the opposite direction.

Does it happen that the documentalism in your works displaces artistry?

I wonder how to express an idea I have inside. Certainty of a document language prevents any doubt, and I highly appreciate the nature of doubt. I think the document itself, is not related to the artist’s language, unless it is used as a tool or material. The document may tell about very important things that are blinding by the mere fact that they exist and are proven. The art will always talk by means of something else, pushing it to the surface. The very nature of the document features communication with a specific time. It is important to overcome the limitations of time or circumstances, to turn the context into a background. It is always intriguing to choose an event that surpasses a certain time.

How does the creation process work? What makes your artistic style unique?

I consider defeat. The times, when due to forced weakness, that sometimes happens, I start to apply some strategy. Constantly trying to somehow cheat on my professional skills and actually direct them somewhere aside. To catch them in the middle of the movement, to stop unexpectedly. For this reason, I often change routes getting to work. Sometimes I use sketches, sometimes I start to work spontaneously. Any technique – if you resort to its use on a regular basis – will certainly bite its own tail. Sometimes it is necessary to push it into the area of inability and ignorance to avoid going in circles. 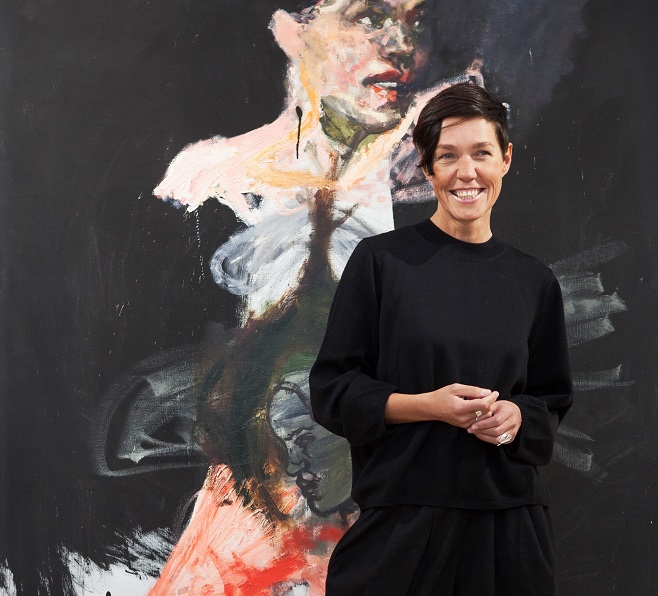 Do you, as a painter, prefer rational or sensory perception of the world?

It’s impossible to choose just one thing, except, according to Immanuel Kant, putting the mind behind bars to delve freely into the unknown, but it will not mean abandonment of the rational. In the creation process, there is always a constant shift, as if you were choosing the exact route, a narrow and the only definitely true path. Sometimes the rational acts in an interesting way: it distracts the mind, occupies it with work. You may pretend that you know what to do, but you do not stop tracking down the unfamiliar. As for me, it looks like hunting. You look out during the continuous work, being ready to discard all your skills in order to jump in suddenly, to catch sight of something important through language transparency or its absence. These are the precious moments when you speak the language you know, and then you suddenly forget a word. At that moment, through that keyhole, that aperture, you can see something substantial.