The Carpathians exist in distinction and abundance.

Wool rugs covered in patterns containing geometrics and creating pyramids draped across racks outside homes in Yavoriv. Silver German cars with Polish plates. Hand-coloured photographs of men and boys in Malanka masks—big and bold ghouls and boars, roaring and romping.

The architecture embodies the bounty, particularly the khatas covered in sheets of tin stamped with goblets and deers and suns—a pseudo-pagan set of hieroglyphs never montaged the same way twice. To the millennial eye, these cabins are coated in emojis. Peaches and eggplants have their implicit meanings on iMessage. A flower in full bloom on a house in Kosiv suggests ripeness too. The impression is there, if you want it.

Summer fling don’t mean a thing. Until it means everything. Cell coverage is spotty, so a sign on stamped tin registers quicker than a text.

The Carpathians are especially ripe this summer, too much so. Cataclysmic flooding has washed away bridges, flooded wells, and made isolated places even more isolated. The perilous situation is a byproduct of excessive rainfall and the consequences of illegal logging—a strange paradox given the prominence of stout, green trees in the visual vernacular of the region on village crests, postcard views, and so on.

This over-ripeness set the tone for a two-week residency I co-managed in the Carpathians with the Ivano-Frankivsk-based curator Anna Potyomkina in early June. Conducted in coordination with Insha Osvita and housed at Khata Maysternya, a retreat managed by Oleksandr Moskovchuk situated in a gap in the woods in the hills above the village of Babyn in Kosiv region, the programme paired two curators, Potyomkina and me, with two artists, Kyiv-based Katya Buchatska and Clemens Poole, who splits his time between Kyiv and New York.

There was a third curator of the residency—the aforementioned rain. For all intents and purposes, the rain was the Chief Curator and Anna and I functioned primarily as its assistants. Indeed, the rain had veto power in all decisions, shaping the schedule and dictating production parameters. Subordinated to the rain’s regime, our relationship with the territory and our sense of what was possible evolved dramatically.

At the beginning of the residency, we read an interview with the American artist Helen Mirra, whose practice is grounded in walking and understated weaving. In her conversation with the interviewer, Mirra mentions that she is working with a renewed focus on “figuratively moving to the side.” The textile artist is seeking to reduce the role of her ego in her engagement with the environment as part of her overall trajectory “toward death and hopefully the deathless.” Her comments simultaneously excoriate and exonerate my personal experience in the Carpathians and the trajectories of our collective residency.

Every afternoon, our group would take a hike. With each passing day, the man-made trails incised through the trails became muddier and slipperier. Man’s way became more and more impassable. Faced with such a reality, we increasingly moved to the side, shifting beyond the bounds of the trail into the brush and scrub. That which had been cleared was less traversable than that which remained dense and unkempt. We could only gain traction when we went outside the lines.

Two questions dominated our days: 1) should we descend or ascend? And 2) should we weave in or weave out?

Khata Maysternya is located several hundred meters above the ‘center’ of Babyn, a loose settlement of roughly one thousand residents. Each day, we were faced with the decision of whether to venture down into Babyn and by proxy into the villages and cities which existed a cab/bus ride away or hike up further into the mountains, whose principal inhabitants are rocks, sheep, and snails.

Aware of how ostentatious it sounds, our decision was one of nature versus culture; the two main buildings in Babyn are a church and a yellow House of Culture, which is at least twice the size of the church. In theory, our team was there to ‘do’ culture. In practice, we usually chose nature.

(The only day I walked alone, I descended. I wound up spending two hours at a mini-mart talking about Soros and Ukraine’s land privatization law with the owner, Yaroslav, his friend, Ivan, and Yaroslav’s son, Andrii. Horilka and bryndza were involved. As was a photoshoot with my cowboy hat.)

At the beginning of the second week, Poole announced his Non-Alignment with the options of descend or ascend. Presented with an option to go up or down, he decided to stay put. Potyomkina and I sought to build structure through organized excursions. Poole’s preferable structure was to remain inside the structure of the khata. His decision reminds that everyone has their own point of total absorption. Of stimuli. Of pollen. Of sore feet. The point which suits you best is yours and yours alone. It is yours to constrict. It is yours to exceed. It is yours to extend.

What fuels you can put you into a funk if you lose your grip on the steering wheel. Even green energy can pollute your body and mind if you cede control and let its engines run unabated. In the context of artistic creation, Poole’s decision underscored that inaction can beget a breakthrough. Moreover, the conversations associated with the decision to shift the programme mid-way through the residency reiterated that the function of a curator is not that of a camp counselor.

The question of whether to ‘weave in’ or ‘weave out’ is coupled with the preceding, and guided our discussions surrounding the stance of what we were to create. Should our work tie itself into the fabric of the place or should it stand in sharp relief? Should it be overt or subtle? Our ‘outsider’ status was obvious. Should that reality be defied or deified?

Alas, the binaries are befuddled, as explained by the transliteration of ‘guests’ into Ukrainian. ‘Guests’ in Ukrainian is ‘гостей,’ which phonetically is ‘hostey.’ In English, the host is the person who welcomes the guest—the one who makes the guest feel at home. The phonetics associated with this translation reverse the responsibility one party is supposed to have for the other’s experience. Purpose is repurposed as who is to serve and who is to be served is rewired.

Ultimately, we never met most of our hosts. What we met was that which they had left behind, whether for the season or for perpetuity. Lean-tos meant to shield cows from the elements. Liter bottles of Lvivske. Sheepherders’ huts. Carved wheelbarrows. Orthodox shrines. We also got to know people by proxy of their limits. The entry to this person’s pasture was a three-panel fence. The next was four-panel. The next one after that was rusted barbed wire. For Buchatska, these traces represented character cues—prompts for personas she could assume. In one instance, death became her. In the resulting film, the artist, clad in black, treks through knee-high grass with a blunted scythe, swinging and hitting a target. The target is the viewer, who, up until their last breath, thought they were in control.

Death is always in the air. In 2020, it is inescapable—even where we were, well above the clouds.

Our two-week residency culminated on the Summer Solstice. The longest day of the year was the darkest day in recent memory; a thick fog consumed the Carpathians, evolving into a driving rain.

On the morning of the Solstice, Buchatska and Poole installed an offsite exhibition ‘Aкти Bідчаю / The Desperate Tone is an Act.’¹ The show begins with a trailhead, jointly authored by Buchatska and Poole, installed at the junction where a string of barbed wire ends. Presumably, this is where a map should be. No such luck. In lieu of a map, direction comes in the form of a red arrow, painted by Buchatska, on the top of the trailhead.

Buchatska’s arrows, seeping and dripping on wet bark, keep coming, blazing a bleeding trail through kilometers of dense terrain. Punctuating the arrows at varying intervals and orientations are a number of phrases written by Poole on stumps and trunks. Done in English with oil pastels, the fragmented texts are addressed to you: “IT GETS WORSE AS YOU GET OLDER” and “YOU DON’T HAVE THE COURAGE TO BE YOUR OWN PERSON,” to name a few. Poole senses you have something to prove. To whom? To what?

You who hikes focusing forward won't have any explaining to do; the phrases will lick your mud-slicked boots.

You who pauses to take a look around is you who has explaining to do. 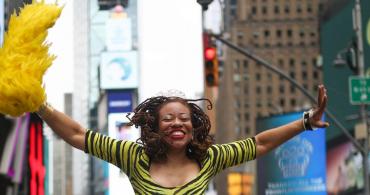