What is TIAB? Several points from The Immigrant Artist Biennial team

The first biennale of immigrant artists was held in the United States this year. The Immigrant Artist Biennial (TIAB) is a large-scale event consisting of several exhibitions and a wide program of performances. The issue of immigrants’ rights in America can be seen even from afar, since Donald Trump's policies and, in particular, his statements managed to attack almost every culture and religion aside from his own.
TIAB is an artist founded project, curated by Katya Grokhovsky, and run by an all-female volunteer team. TIAB launched in March of 2020 with two performances at the Brooklyn Museum, however, due to COVID-19 most of their institutional partners (Queens Museum, Artist Alliance, Bronx Art Space) who were slated to host the shows were unable to accommodate this fall.
The biennial team decided not to stop the production in 2020, but to continue the work and therefore everything was moved online with the exception of Here, Together! — the central exhibition opened in September at Elizabeth Foundation for the Arts.
Overall, TIAB presented projects of over 60 artists across 4 exhibitions and numerous performance events, including two live events at Greenwood Cemetery in Brooklyn. The virtual exhibitions are:

For a Ukrainian reader, the launching of TIAB can be of interest, not only due to its artistic significance but also since the founder and curator of the biennale is connected with Ukraine. Katya Grokhovsky was born in Odesa, in Soviet Ukraine, moved to Australia in the early 1990s, and relocated to the US later. In the following material, ArtsLooker asked the TIAB team (Anna Mikaela Ekstrand, Katherine Adams, and Katya Grokhovsky) a few questions about their aims, challenges, and insights concerning American (and international!) contemporary art world.

What were the central discussions during the TIAB?
AME: We showed over 60 artists that work with themes relating to migration, immigration, assimilation, discrimination, and negotiating cultural belonging, but also works beyond the scope of these topics. We had studio visits with each participating artist – before COVID in person, after on Zoom. There was one reoccurring topic with most artists: their visas. The Immigrant Artist Biennial is a platform for immigrant artists often in precarious visa situations to exhibit.

What are the main challenges of immigrants in the US now?
KA: The first is the obvious one — that the past four years appear to have emboldened a great deal of anti-immigrant sentiment in the U.S. In addition to continued practical barriers to obtaining security here, this ideological issue has become very challenging. The second is that ideas of diversity in the U.S. often fail to account for the value (and difference) of international perspectives and in that aspect they can be narrow. The U.S. of course has a fraught history of racialized trauma & violence, but the international legacy of the U.S. and its isolationist tendencies appear to inhibit consideration of less U.S.-centric standpoints. Immigrants can end up having to calibrate their social position in an Americanized way in order to benefit from discussions around equity, stressing race, color, or a physical marker without having their particular immigration issues addressed directly. It would be positive to see immigrants integrated more explicitly into conversations around social justice. This is not in any way to diminish the value of addressing equity in other terms, but there could be much more nuance in such discussions, so as to address the needs of people from different countries and cultures.

What inspired you to start such a project?
KG: I am a double immigrant, from Ukraine to Australia, Australia to the U.S and I have always felt like an outsider, everywhere I go. The idea of a platform supporting immigrant artists specifically has been brewing in my mind for a long time. It became particularly pertinent during the reign of the Trump administration when immigrant communities became a target of extreme discrimination and prosecution. I have also been working as a mentor in the New York Foundation for the Arts Immigrant Artist Mentoring Program, where I saw many issues immigrant artists living in the U.S faced. TIAB seemed necessary and important to establish in 2020 to not only support artists but also to spotlight particular significant issues they are working with.

Why did you choose the topic of immigration? What are the main challenges of immigrants in the US now?
The biennial itself was established to support and exhibit the work of immigrant artists, who explore a variety of themes, including concepts of home, identity, language, alienation and belonging. The topic of the first edition titled “Here, Together!” is unity, at the time, when the U.S as a country is extremely divided and bipolar. Immigrants in the U.S face discrimination, and general ignorance, which greatly affects the quality of their lives.

Are you planning on continuing to work on the biennial? (Are you planning to create this biennial every second year?) Did you have time to reflect on the project? What changes are you going to make for the next TIAB?
I do hope to continue working on the biennial, staging at least another edition, in 2022. TIAB is a DIY artist-run project and has no ongoing funding or institutional support, so its future is pretty precarious. The idea is to produce a biennial every second year for the foreseeable future, but it is quite a difficult undertaking. But like any project, it might come to its natural end at some point and enter history. For now, I haven’t yet fully taken stock of what happened in 2020 in regard to the biennial, but I am conceptualizing the next one. The big change I am planning to make is to step away from the chief curatorial role of TIAB. Other curators will be invited to propose new ideas for the project.

Knowing that you were born in Ukraine could you, please, tell us more about your relations with the country? Do you have a connection with Ukrainian culture/traditions? Is your family still here? Do you have a community of artists with Ukrainian roots in NY?
I was born in Soviet Ukraine and left in 1992, so my relation to Ukraine as an independent country is pretty minimal. My identity is wrapped up in growing up in the Soviet Union with a Russian Polish father and a Jewish mother. Most of my family migrated to Australia in the 1990s, so I do not relate to one nationality specifically. My artist community is very mixed, including many cultures, and ethnicities, representing a melting pot of NYC and my own inner feeling of confused identity.

Why did you decide to become an artist and curator?
Becoming an artist was never a choice as such or a decision, it is a vocation for me, I simply cannot not do it or do anything else for that matter. My curatorial practice grew out of my artistic work and my natural desire to organize and create communities and to reach out beyond my own studio walls.

Who influenced you the most in your practice?
Female artists have influenced me the most. I have always been inspired by the tenacity of many women to practice and establish their work despite extraordinary obstacles and a generally male-dominated artworld. Artists like Louise Bourgeois, Eva Hesse, Phyllida Barlow, Faith Ringgold, Sarah Lucas, and many more.

What is fundamental (basic) practice for you: artistic or curatorial? Or maybe something else?
Drawing underpins everything I do; it is a practice I have kept up with since my childhood and it is a compulsion I can’t live without. In my curatorial work, conducting studio visits with other artists is the core practice for me and keeps my interest in curating, burning bright.

What is the most interesting or exciting topic for you right now?
The themes in my work are ongoing and I obsess over them for years, including migration, home and displacement, which are autobiographical. I am also interested in family history and female lineage and legacy, body image, gender and freedom of choice to live an unconventional life as a female artist.

Can you please give advice on what to read or what film to watch to our readers? What should we listen to?
I highly recommend anything by these female authors: Roxane Gay, Rebecca Solnit, Svetlana Boym, bell hooks, Virginia Woolf. In terms of music, I mostly work in silence, but for inspiration and uplifting of the spirit and soul, I prefer classical music and in absolute contrast, some Euro-trashy pop, whenever I need energy for completing difficult tasks. 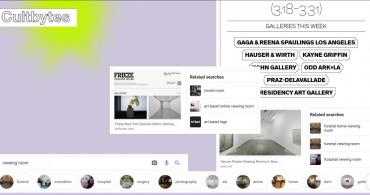 22.03.2021Can Virtual Platforms Help Chip Away ‘Exclusivity’ from the Art World?