Everything started 24th of April from the post on the Facebook page of Borisenko Art Gallery. During 3 days, the publication was reposted 2965 times. “He came to us a month ago. At the first glance, he seemed to be from the other planet. The smile was on his face all the time, as if he excused for encroaching upon my time. The orphan…with cerebral palsy…32-years old…He got out his notebooks out of a packet…Lots of notebooks…These are notes of sadness and loneliness…We made snapshots some of them… What should we do with all this? Help me… Because he came to us. AVATAR…”

ArtsLooker decided to find Nikita with a view to help him. Fortunately, things are going well, Nikita has nearest people who care about him, buy him clothes and promote the development of his talent. They buy brushes, paper, notebooks, pens, plasticine and give him pocket money for all his needs. The guy came to us being extremely franc and heartfelt. He said “I am Nikita Storozhkov”.

He quickly lays his notebooks on the table of Gallery fully ornamented by unreal creations, and started the conversation:

“This is my working, idea and imagination. In one of my notebooks I drew ancient Chinese symbols and writings. I used to visit wushu. There were only four Ukrainians and the rest were the Chinese. I asked them who were teachers, and it appeared that Ukrainians thought the Chinese. They live in our country and then go to different competitions, win and return to us and continue their studying. There I met the Chinese professor who thought me Chinese and Japanese hieroglyphs. I continued to study the martial art. And learnt hieroglyphs”. 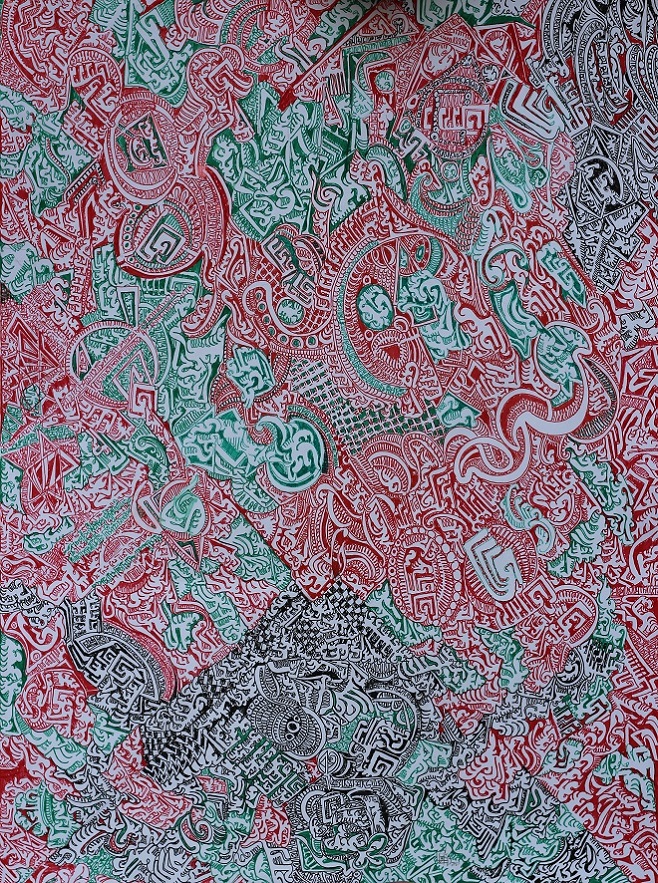 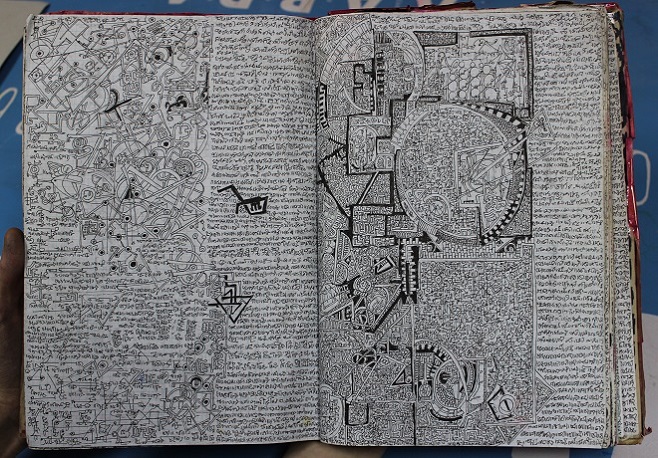 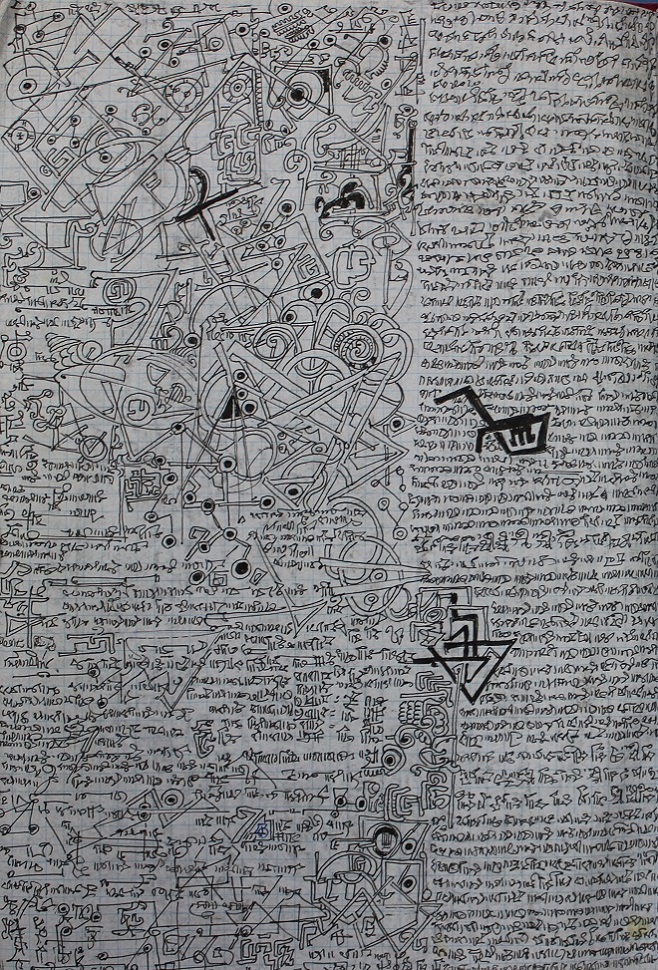 “I make notebooks myself. My works are mysterious. I use a rarely ancient script from Saudi Arabia. Pictures contain ancient letterings. I drew it myself only using my imagination”.

“I wanted to refer to original. My drawings will be interesting for science, religion, esoteric. Geometric figures in my works show what is now and what was in the past. I want people think positively looking at my works”.

“I have been preparing and developing the idea for 2 years. I made my first drawings at the age of 26. First, I drew on walls of my room, and then I pictured all walls of a summer cottage. I draw everywhere – on a bench in the street, in the kitchen, in the room. People pay attention to me, come closer and ask about my works. Once, they really liked my drawings and the information that I told them about Arabic letters. As a token of appreciation, they gave me an Arabian banknote. I keep it in my notebook with Arabic symbols.”

“One of my work depicts nirvana, the transformed life. I believe in reincarnation. The Buddhists aren’t afraid of death. They live and die peacefully. I have never talked to them. Thinking about reincarnation, I want to remember, who I was in the previous life. Maybe I was a scientist or an artist”. 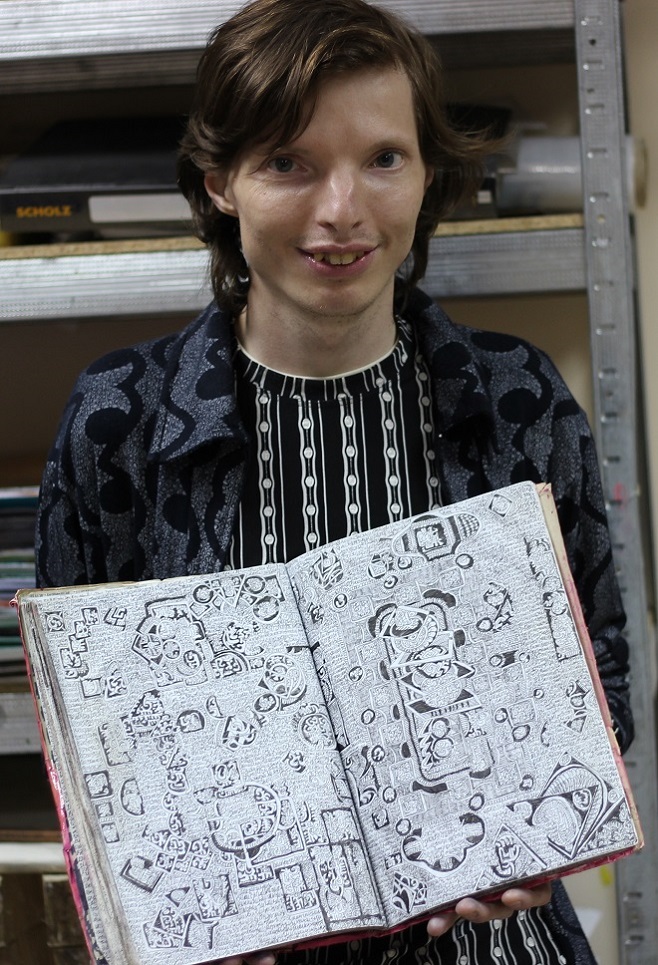 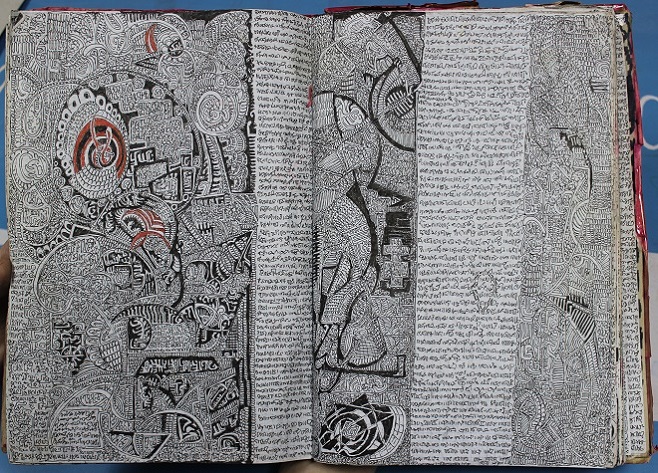 In some way, I am artist. I can depict houses, doors, cars. 10 years ago on the occasion of World War II, I drew tanks, guns, burning views. Now I draw ancient scripts and symbols”.

“It is ancient Japanese. Look how it is beautiful! Isn’t it a masterpiece? The hadron collider is hiding here”.

“Crosswords are easier than my works. I draw the calendar of Aztec, Inca and Maya dated by XV-XIII centuries. Paintings contain a lot of information”. 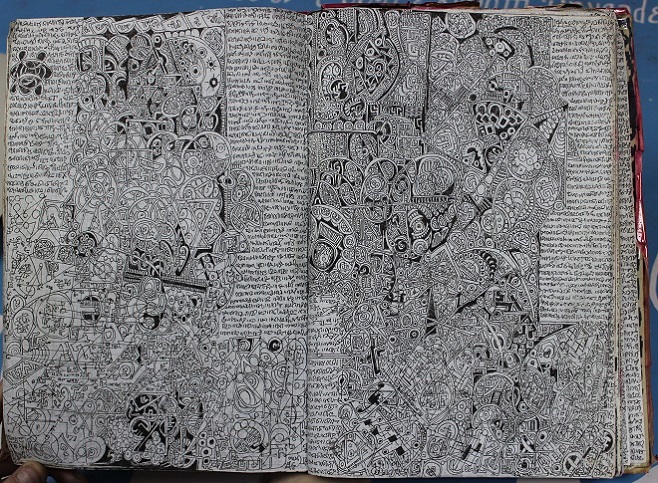 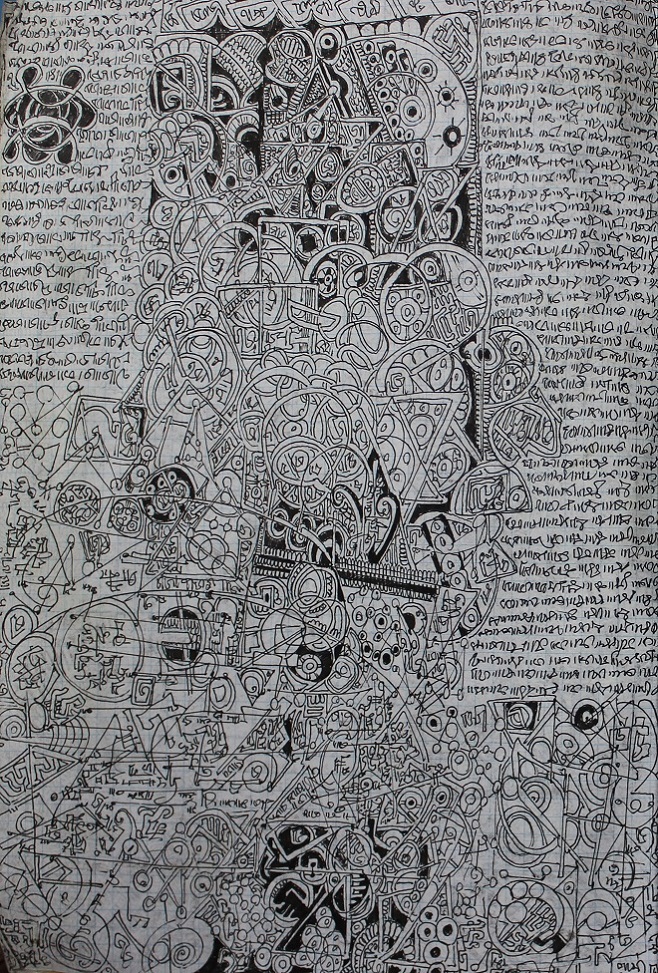 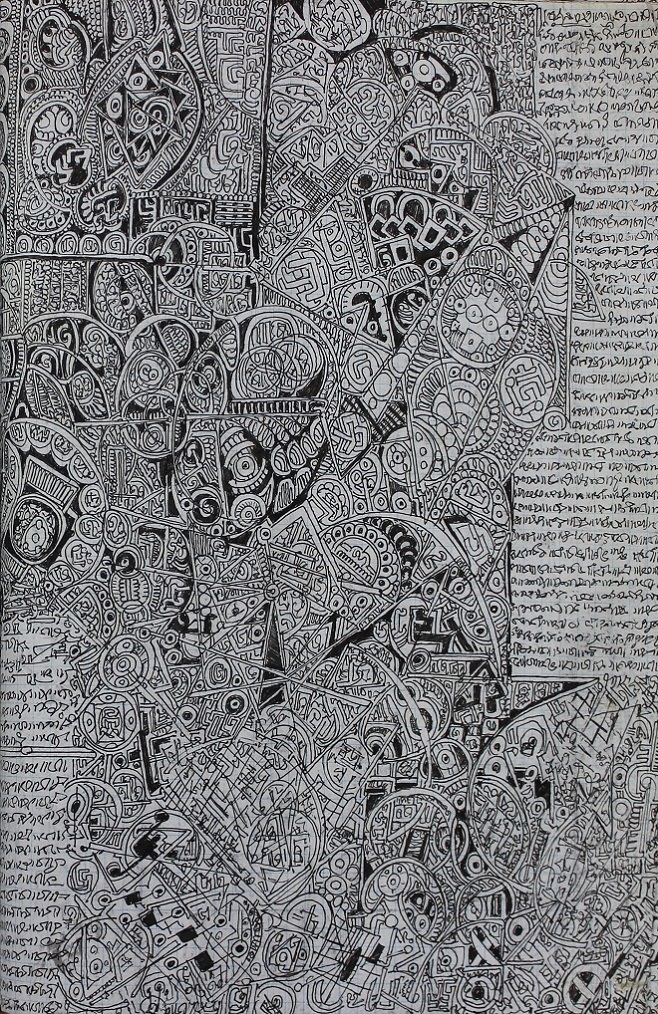 “I like watching “The Battle of extrasensory” and have my own favorites. They help people, clean them of evil energetic as our grandmothers did. We call them molfarka that is a wisewoman, a white witch. I have never been to Carpathians but I really want to visit this place. I have seen the mountains only on TV”.

“Europe once had its own alchemists and wizards, but they were wiped out. The Romany are descendants of those wizards. I see them in Kyiv, but they avoid me”. 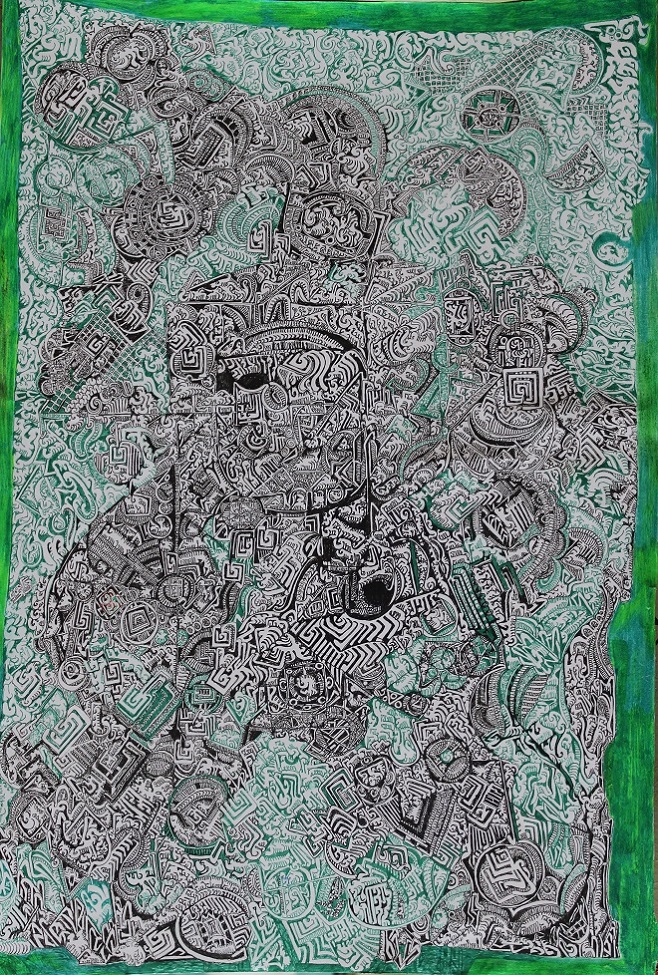 “I have studied the Trypillian culture from the Internet. I write Chinese and Arabian symbols in a notebook, and Ukrainian – on the big sheets of paper. The Trypillian were pagans, but very intelligent. It is believed they didn’t have their own script, but I’m absolutely confirmed that these signs are the script. The Trypillian burnt out their houses, as they believed the evil could enter into their lodgings. Even now, there are some houses and wooden churches where people cannot enter. Such places have great energetics”.

“A red colour is the colour of world unity. That is why Cossacks wore red baggy trousers and Ukrainian girls – red boots. I like Cossack-Kharakternyks, because they were unconquerable. They wore special belts with wings”. 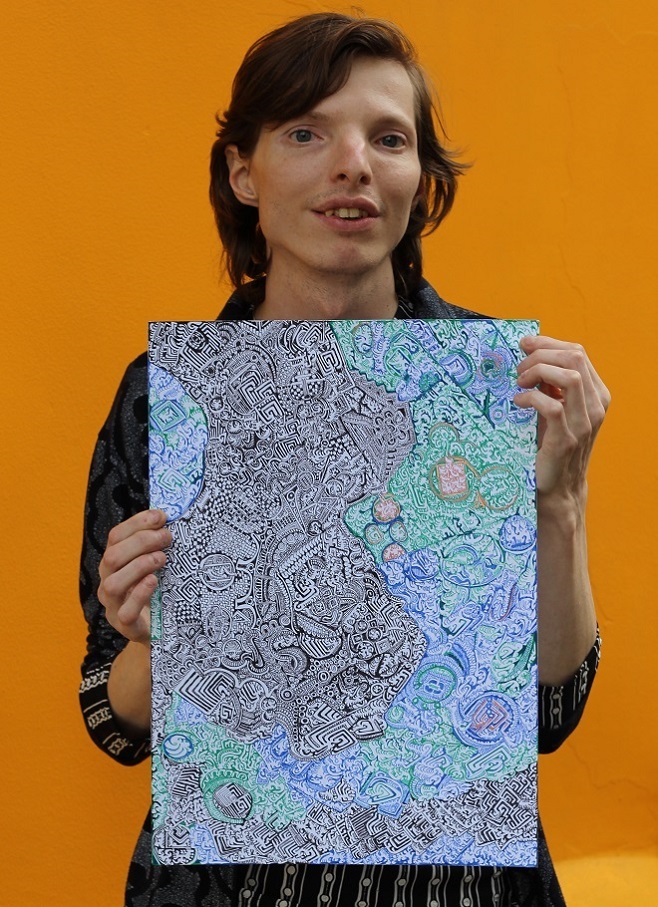 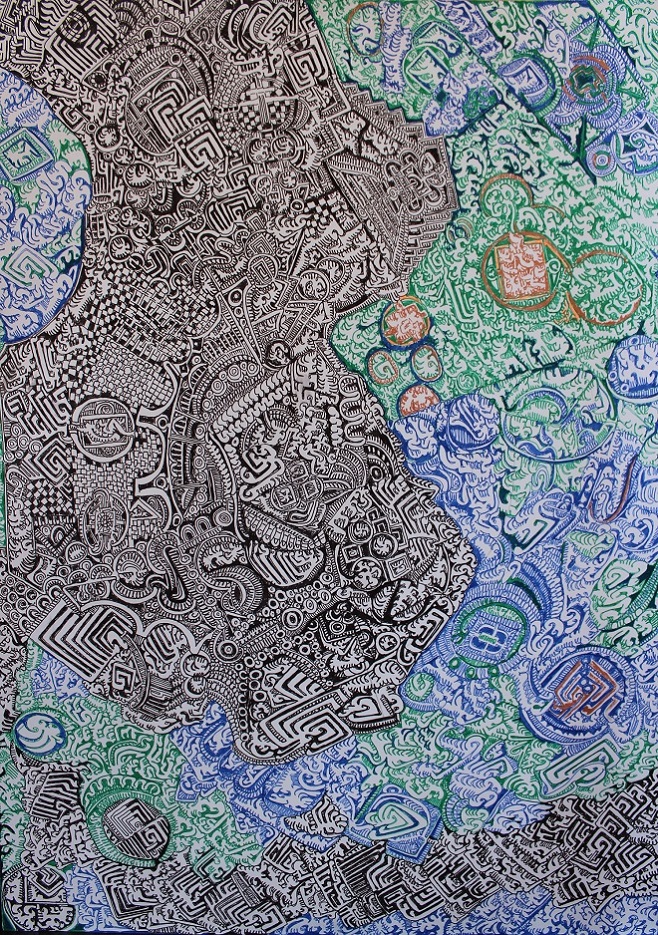 “These are stones, and we can see a pyramid here. This picture is like a talisman, as pysanka (painted Easter egg). This is the same”.

“I improve the ancient culture, make it more modern to drop the curtain between the past and the future. Our generation should remember our ancestors. We can’t just forget them”.

“I always have inspiration and good mood. It doesn’t make matter whether it is raining or shining, because I haven’t bad days. I always have desire for creation. I can work all the day, but generally, I draw in the morning. I make 2-4 pictures a day. I spend 20 minutes for one work. I must say that I have never seen my pictures in dreams”.

“I don’t only draw, but make hieroglyphs from chewing gums. I do not chew it, just wash of sugar and get finished material. People throw it out, but they shouldn’t do it. Moreover, I have toothpicks, which I also use to create different things. I have different projects for plastic bottles. I can make cars of plasticine and customize them. The doors in my cars can be opened and people wonder a lot seeing it”. 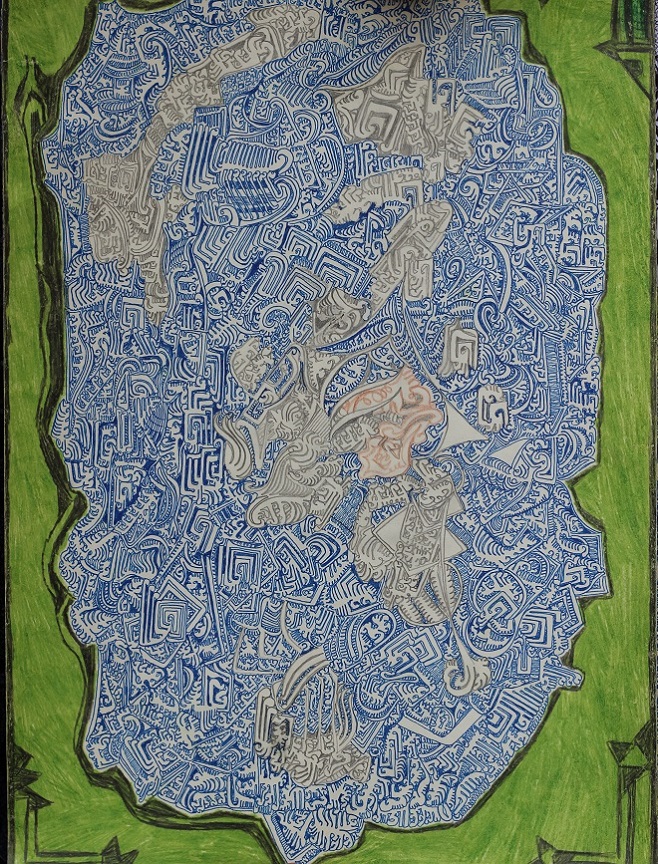 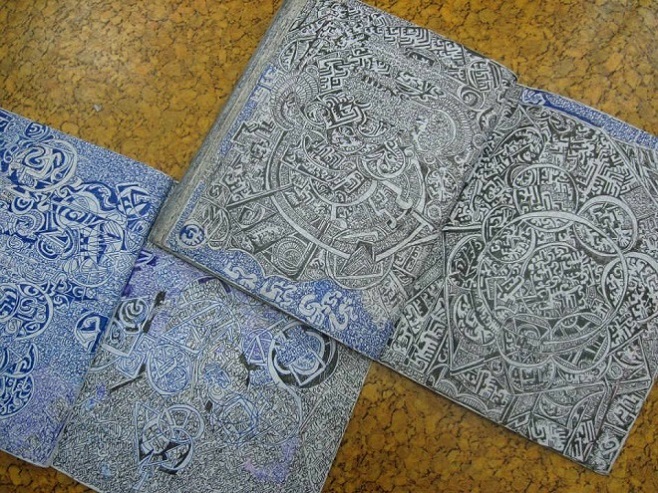 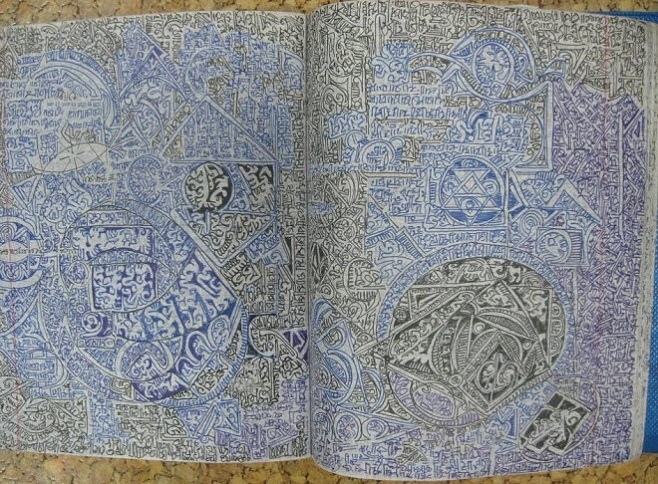 “I love movie! I used to spend a lot of time in Florence Cinema. The ticket cost 10 hryvnas and I was able to spend all the day in the cinema. There are four halls, which I have visited. I like fiction films. I am not very interested in drama and comedy. I have seen Avatar, this is a really cool film! Avatar is an Indian God in the image of a cat. In my book, Alien vs. Predator is a masterpiece”.

“I have seen Svyatoslav Vakarchuk, Stepan Khmara, Bohdan Beniuk. I like to listen to Ukrainian songs. It was a musical Sorochintsy Fair where Nina Matviyenko sings the song “Kvitka-Dusha” (Flower-Heart) written by Kostyantyn Meladze. I like such songs. I also like compositions of Skryabin, for example “Lyudy yak korabli” (People like ships). This song is like our life. Our country has an interesting music”.

“We can’t deny God’s existence. Bulhakov wrote The Master and Margarita having notions about God”.

“Now, I don’t read books not to be distracted from my exhibition”.

“I was said to have an exhibition in Kyiv Palace of Children and Youth, albeit when I came to the Palace for preparing to my exhibition, I was said facilitators had gone to Slovenia. After such response, I came toBorisenko Art Gallery. I’m very grateful to be seen here. Many gifted children come here and paint. They draw a window with a cat on a sill looking at the moon. What imagination! Unbelievable!” 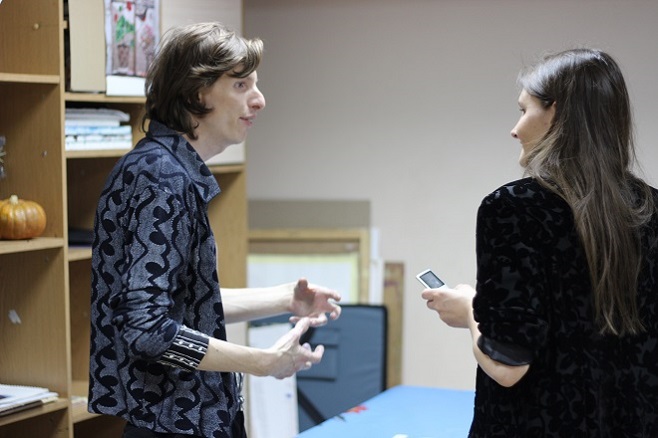 “What should I do? I should move on. I am dreaming about my exhibition. I want to know what people think about these works, and which picture will be the favourite one for them. And then I will make another more cool art project. I will take a big sheet of paper and combine Arabian, Chinese and Trypillian writings. Culture will win. We all have one source of culture, which was passed through the Silk Road. We can have different religious tastes but we have one culture. We need the culture of revolution. I want to glorify Ukraine in the world, that everybody know we have talents. We want peace and tranquillity”. 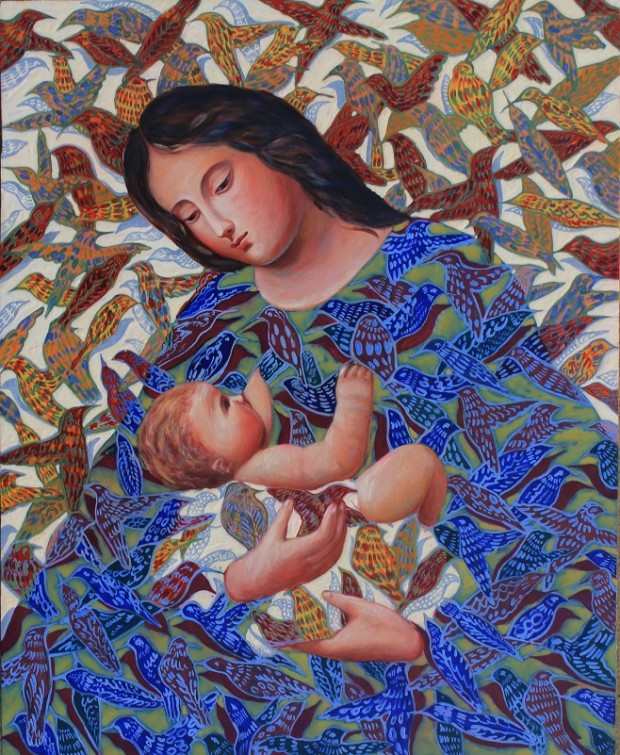 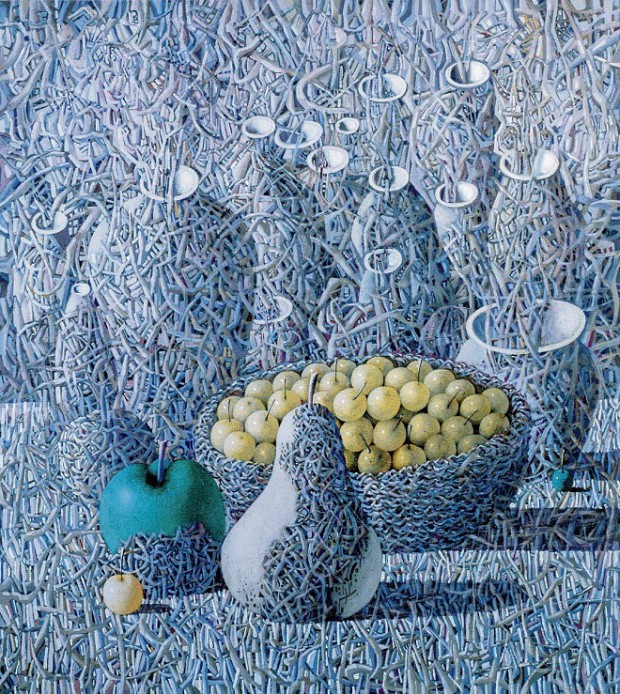 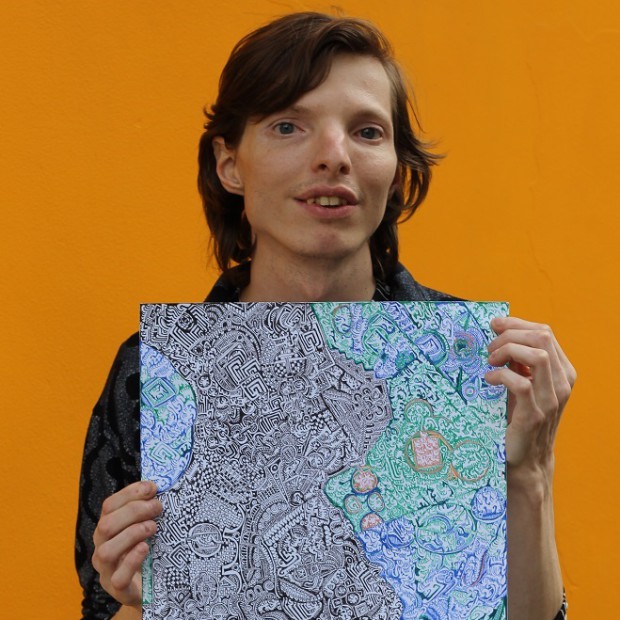 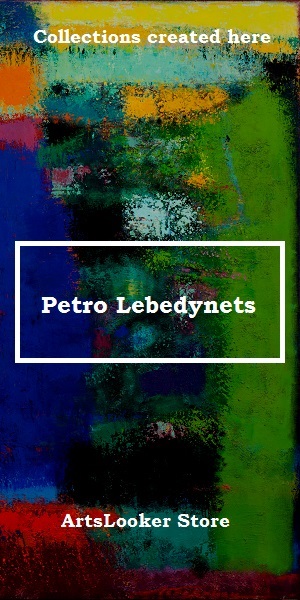 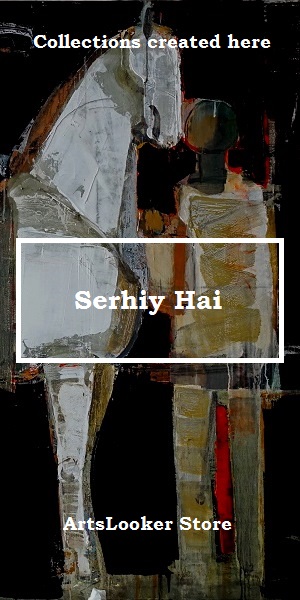